Home > Pumps and Blower Blog > What Are Three-Stage Compressors and What Are Their Advantages?

What Are Three-Stage Compressors and What Are Their Advantages? 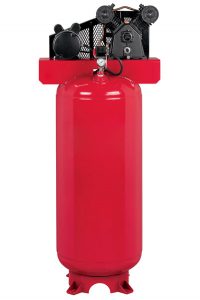 In a three-stage compressor, the air will go into the first intake and be compressed before traveling over a cooler. This minimizes the heat that has accumulated through the compression process and lets it get close to room temperature. Next, the air goes into an intermediate stage compressor during which it is heated as a natural byproduct. The air then goes over another cooler to bring the temperature back down before passing it over the third stage. At this point, it gets compressed to the pressure needed, cools in the after-cooler, and is sent to the air receiver.

The biggest advantage of three-stage compressors is that they are able to control the temperature of the air, which leads to several other benefits. This includes a reduced risk of mechanical issues and a lower amount of work being done, letting you save power. The three-stage method also helps reduce the effects of moisture since you can drain it at every point. The machine itself is also smaller in size and balanced better. Three-stage compressors also tend to have lighter moving parts that are made using aluminum, meaning that they are more affordable than single-stage compressors and easier to maintain.

If need new equipment, you can count on us at Pat’s Pump & Blower in Orlando, Florida to carry a variety of pumps and blowers from reputable manufacturers.